Divorce in Northern Virginia proceeds along the same track as any other civil lawsuit filed. After the Complaint for divorce is filed, the parties and their divorce lawyers can move the court for temporary relief immediately, and have discovery tools available to them (for example, interrogatories, depositions, request for production of documents, and subpoenas). Types of temporary relief parties available in a divorce case are spousal support, child support, custody and visitation and exclusive use and possession of the marital home. There are other forms of relief available to divorcing spouses once the case is filed, for example, injunctions against waste or dissipation of marital assets, or restrictions on contact of children with a spouse’s paramour. 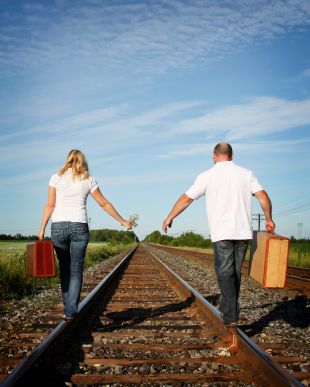 In Northern Virginia Divorce, Removal of One Spouse from the Home is Accomplished by Injunction

Circuit courts in Northern Virginia divorce proceedings derive their authority to issue temporary relief largely from VA. CODE ANN. § 20-103. The statute provides two instances in a divorce case when the court may remove a person from the marital home and grant exclusive use and possession to the other spouse. The first instance is akin to the standard applied to requests for protective orders in non-divorce cases. The statutory language requires a situation where there has been a showing of a reasonable apprehension of physical harm by a family-member or other household occupant. In a divorce proceeding, a protective order would not be issued, but the standard is similar. The difference between this type of relief in a Northern Virginia divorce case and a protective order case is mostly that if exclusive use and possession is granted on this basis, there is no automatic restriction on contact between the parties after the offending party is removed from the home.

The second instance in a Northern Virginia divorce case that exclusive use and possession of the home can be granted has no guiding test or standard for circuit courts in Virginia to follow. VA. CODE ANN. § 20-103(A)(vi) austerely states the court, in its discretion, may order that one party have exclusive use and possession of the marital home while the divorce case is pending. Divorce appellate case law provides virtually no guidance either, likely because they have not had the occasion to hear many cases involving this issue.

Extraordinary Relief in Northern Virginia Divorce Cases, With No Guidance

In non-domestic contexts, broad equitable powers of the circuit courts are guided by factors set forth by appellate courts. For example, regarding the trial court’s equitable power to set aside a default judgment when no adequate remedy at law exists pursuant to VA. CODE ANN. § 8.01-428(D) (1950), the Supreme Court of Virginia has issued a five-factor test as guidance for lower courts when considering whether equity requires a judgment to be set-aside. See Charles v. Precision Tune Inc., 243 Va. 313, 317 (1992) (the five factors are “(1) a judgment which ought not, in equity and good conscience, to be enforced; (2) a good defense to the alleged cause of action on which the judgment is founded; (3) fraud, accident, or mistake which prevented the defendant in the judgment from obtaining the benefit of his defense; (4) the absence of fault or negligence on the part of the defendant; and (5) the absence of any adequate remedy at law.”).

The appellate courts, if given the rare opportunity to consider the matter, or the legislature should make this eight-factor test applicable in Northern Virginia divorce proceedings:

Why Is This Test Appropriate for Northern Virginia Divorce Cases?

Virtually every analyses regarding matters ancillary to a divorce which are utilized by a circuit court, including those related to equitable distribution, spousal support, child support, child custody, and visitation, are bounded by statutory factors for consideration such as VA. CODE ANN. §§ 20-107.3, 20-107.1, 20-108.2, and 20-124.3. Appellate case law is robust and provides guidance and certainty for practitioners and litigants in Northern Virginia divorce cases with regard to the judicial interpretation of the factors set forth in the above-referenced statutes. Those factors are also regularly used during pendente lite hearings (hearings where this temporary relief is requested), specifically those affecting custody, visitation, spousal support, and child support. The extraordinary injunctive remedy of forcing a spouse to leave his or her home on a pendente lite basis is one of the few niches in the law of equity or domestic relations with little or no guidance for practitioners and litigants that is consistent with the legislative and statutory goals of the divorce process.

The specific mechanism that does not benefit from the guidance of a test, such as that articulated above, is equitable distribution. The injunction granting one spouse exclusive use and possession of the marital residence directly bears on the eventual disposition of the use and possession of the marital residence with regard to maintenance and preservation, service of debt, continuity for parties who will reside in the home after the divorce, and can have serious collateral consequences on other ancillary matters to the divorce, such as establishing a successful parenting pattern prior to a custody trial. Despite VA. CODE ANN. 20-124.2(B) (1950) explicitly stating that there shall be no inference in favor of either custodial parent, stability for the children whose custody is in dispute bears directly on a final custody determination. Hughes v. Gentry, 18 Va. App. 318, 322 (1994) (citing Peple v. Peple, 5 Va.App. 414, 421 (1988)). The policy goals in Northern Virginia divorce cases of other matters ancillary to the divorce, such as child and spousal support, are facilitating “scenario[s that] promote . . . consistency in the provision of support [and] efficiency in the administration of justice.” Ipsen v. Moxley, 49 Va. App. 555, 569 (2007). This concept extends to and is consistent with the stated statutory policy goals of the equitable distribution scheme in Virginia; “by making equitable distribution more predictable the General Assembly has encouraged settlement, decreased litigation costs, and made the division of property much more equitable.” FAMILY LAW: THEORY, PRACTICE, AND FORMS § 11:1 588 n.35 (Peter Nash Swisher, Lawrence D. Diehl, & James R. Cottrell, Vol. 9 2012) (quoting EQUITABLE DISTRIBUTION OF PROPERTY, Appendix A (L. Golden 1983). Adopting the eight-factor test as articulated above for pendente lite injunctive relief of exclusive use and possession of the marital residence in Northern Virginiadivorce cases would secure the presently adrift area of law governing injunctions for exclusive use and possession of the marital residence.