As the world becomes more connected and more mobile, people from different countries are marrying each other more frequently. Not surprisingly, and unfortunately, this is also leading to higher rates of international divorce. International divorces have the potential to be much more complex than domestic divorces. Besides bringing foreign cultural backgrounds to the marriage, international spouses also bring foreign property rights, and the law of one or more countries may be applicable. One example would be simultaneous divorce proceedings taking place in two different countries. Both countries’ courts may have jurisdiction to dissolve the marriage and adjudicate the rights both spouses. Acting quickly can often be the key in international family law proceedings. For example, if the two countries were England and the United States, it will likely take you considerably longer to get a temporary order from a court in England, depending on the location of the other court. Though an English court is not required to defer to American divorce proceedings, if an American divorce proceeding is underway and orders are in effect, an English court may be less likely to disturb it by moving forward. Location of property, children and other matters under the courts’ jurisdiction may play a significant role in one court voluntarily deciding whether to stay their proceedings and let the case move forward in another jurisdiction. Many factors play a role in which country assumes jurisdiction in international divorce proceedings. Perhaps one jurisdiction would provide you with a more favorable outcome than the other. Alternatively, certain countries may not be able to assume jurisdiction because of requirements for extended periods of separation, such as Ireland. 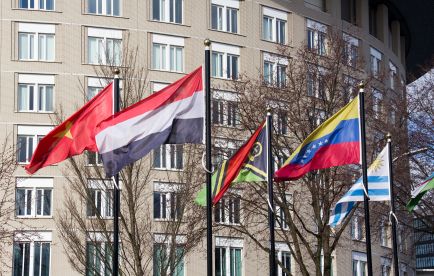 The biggest question in the realm of international child custody disputes, much like international divorce proceedings, is which country has jurisdiction. The Hague Convention on the Civil Aspects of International Child Abduction is a treaty that provides a mechanism to determine which country should hear a child custody dispute when a child has been wrongfully removed from her home country or wrongfully retained in another country. Proceedings pursuant to the Hague Convention do not actually determine international custody and visitation rights among parents. It simply provides a mechanism to determine which country’s courts will hear the custody and visitation cases. Not all countries are members. Resolving an international custody case with a non-member country is likely a far less-structured process, and is done through local courts rather than the tribunals that are set up pursuant to the Hague Convention. Depending on the country, this can be a positive or a negative. Obtaining attorneys in both jurisdictions is usually necessary to obtain proper advice. Resolving international custody disputes is a complicated process and retaining an experienced international family law lawyer can give you the best chances for a successful outcome.